@prologic @ionores (re #iOS App!) Yeah lots of more work to do but it is a good start. Now we can improve bit by bit. Let us know if you want to be a beta tester.

@prologic why some emoji are rendered ☺️ differently than others? 🤔

@prologic (re too much information) Maybe, but still cool. 😎

@prologic (re first app) It’s been a fun ride so far. I am super excited and hoping we can take this community even further.

@prologic (re automating App Store process) This might come handy a bit later. For now TestFlight itself it setup so we are good until we go live in the App Store then automation will be good. I will ask for help if needed. ☺️Thanks for offering to help.

@prologic @dooven (re automating App Store process) I might use fastlane I also use bitrise for work.

If anyone reading this wants to be a beta tester for twtxt iOS app, please let me know. The first version is out on TestFlight.

@lukem (re Monday depression) thanks 😊 we are just starting

Testing from app from TestFlight 🍾

App store process to submit apps is hard work. I will have to spend sometime later to automate this for twtxt iOS app.

@lukem (re Twtxt Net API) That is awesome. Are you planing to open source it?

@lukem (re Twtxt Net API) 😍 tell us more about it. What it is? What language is built on? I don’t recognize the lang from your screenshot.

@prologic (re TestFlight) I have this small list to toggle and then TestFlight. We are almost there 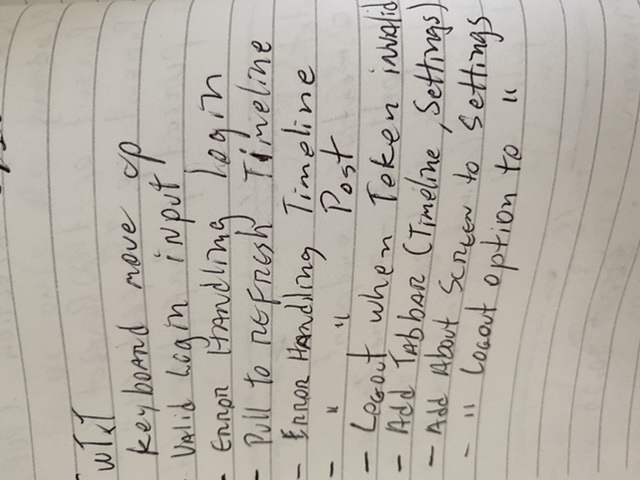 @prologic @dooven Yep! And that is so nice!

@prologic (re TechTinkering liking twtxt) I don’t think @TechTinkering will see your twt. Am I right? But I can try to tweet at him. I knew keeping my Twitter™account would come handy one day. 😉

@prologic (re Sleeping) I am starting to think otherwise. 🤣

@prologic (re API time stamp issue) Check it now. Yes it is fixed. Thank you.

@prologic (re API time stamp issue) Thanks. FYI… not a blocker. 😀

@prologic @lukem (re Android App) If you do decide to build something feel free to ping me with whatever question you have. You are welcome to the team anytime. ☺️

@kt84 (re Looks Amazing) Thank you! Not as fast as @prologic to build stuff but I am getting there. ☺️

@prologic I think I found an issue with the timestamp

One more twt to make sure I got this timeline issue right.

That is definitely something weird with the API and timestamps/

Looks like the posts when retrieved via /timeline API endpoint are showing 7 minutes faster. 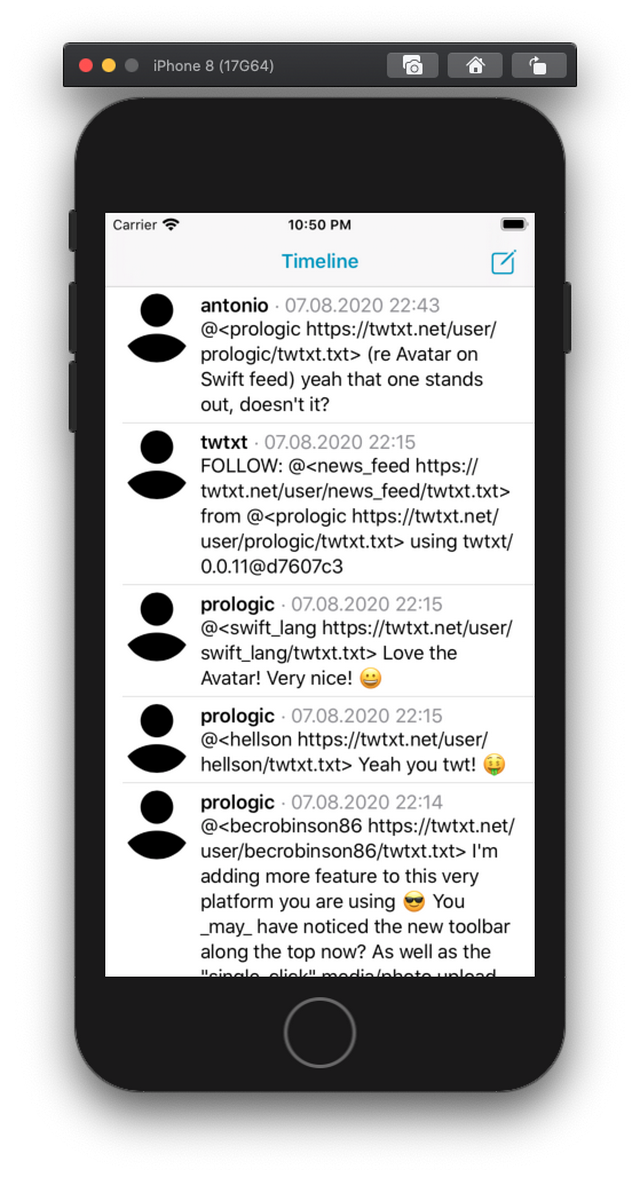 @prologic (re Avatar on Swift feed) yeah that one stands out, doesn’t it?

@dooven (re DnD online) how do you guys do it? A zoom call? Everyone has its own dice?

@prologic (re API keys / limits) Nice. All makes sense. After giving some more thought I believe we can add this later if needed. We don’t need to decide it now.

@prologic (re API keys / limits) Yeah that is more complicated especially with other instances / pods now that you mentioned and I think about. An app that supports multiple instance will need to register itself with every Pod operator? That is ugly and complicated and defeats the purpose of an app support multi-pods. I need to understand it better too. Is there another way to do rate limits that you know of?

@prologic What do you think about adding user uploaded avatars for Personas feed like my @news_feed ?

@prologic (re API keys / limits) Yeah some sort of limit. But how would you do that? I think one way to do it is to use a API key, no? And what I mean by bad / buggy clients is in case I release an app that has a bug that it is DDOSing twtxt.net you could suspend the app until a fix is out.

@prologic (re CLI UNIX style) very nice idea. Should we add some API key for the clients so we can turn off the abusers? Or even temp suspend buggy clients?

@prologic (re API) Thank you. I will have a look and try to get the first endpoint working later tonight.

@hjertnes (re bookmark hobby project) Is it open source? Link? What language?

Strating working on the API endpoints for the app. 😎